Hydro-diplomacy in practice: The Challenge of Iran's Border Rivers and Its Security Conforcement

Extended Abstract
Introduction
In the world, the Middle East undoubtedly has the most hydropolitical issues, because one of the most important sources of water supply in this arid region is the permanent international rivers. Therefore, in this region, relations between countries on access to water resources are significantly related to economic and political relations. On this basis, Iran is one of the constituent and important countries of the Middle East region, which has common border rivers with its neighbors in four geographical locations. Nearly 22% (1918 km) of the country's common border 26 They form small and large rivers. (The total borders of the country are about 8755 km, of which 2700 km are sea and 4137 km are land). The largest river border is related to Aras river with a length of 475 km and the smallest river border is related to Diraj river with a length of only 2.5 km and is part of the common border between Iran and Iraq. The only navigable border river of Iran is Arvand River with a length of 86 km with Iraq. These rivers, especially the rivers entering the country, have created tensions today, which are expected to turn into raisins and wars in the not-too-distant future, and relations between existing countries. It will disturb the region, in which case it will have many security consequences for the geographical space of the country. Thus, the resulting trends, especially the environmental crisis formed by water scarcity in the border areas, will leave many security-disciplinary consequences, the results of which are especially important to know with a futuristic view to design strategies. Accordingly, the question that arises in the present study is how Iran can resolve the challenge of its border rivers and what are the security-disciplinary consequences of the challenge of Iran's border rivers?
methodology
Qualitative research includes a set of material-interpretive practices that make the world visible. Therefore, in accordance with the qualitative strategy, the "descriptive-analytical" research method has been used to conduct the research. It is worth mentioning that the present research is applied in terms of purpose. In this regard, in this research, in addition to illustrating what exists in the field of hydrodiplomacy and its performance in border river issues, it is also explained and explained its concept. In this article, library information, websites and first-hand sources have been used to collect and record it. The scope of this article is the border rivers of Iran, which with a systemic approach and based on hydrodiplomacy, seeks to provide scenarios and solutions to solve the water crisis of border rivers and reduce water challenges to facilitate NAJA missions.

Results and Discussion
About 22% of the common border of Iran is made up of 26 small and large rivers. Hence, the issue of water from a geopolitical perspective has not yet been considered in decision-making by Iranian decision-makers. Although today the issue of water crisis is one of the topics that has been discussed and there is not a day that is not discussed about various issues and aspects, its effects and consequences of wetland drying and improper consumption and management strategies inside, with However, the role of water from a regional and international perspective at the level of macro-diplomacy decisions has been small or overshadowed by other issues, including political and security considerations, has been of lower importance. From an international perspective, Iran is located in a region where the issue of water is of paramount importance along with the issue of energy. Only by looking at the hydropolitical conditions of the region (as a section of the geopolitical system) at the scale of neighboring countries, it can be seen that Iran is important not only in terms of political geography; But also the political conditions related to water and water interactions in the region have made Iran have unique characteristics from this perspective. Failure to pay attention to it can lead to irreparable damage. For example, despite past good cooperation between neighboring countries in the northwest of the country in the exploitation of the common Aras River, which originates from Turkey and is shared jointly between Iran, Azerbaijan and Armenia, due to the complexity Our political relations between Azerbaijan and Armenia and the activities of Turkey in the source, the existing stability can be shaken and the scope of this instability may extend to Iran as well. Thus, although the degree of dependence of water with foreign origin is between 7 to 8%, and this rate is not significant in the national dimension, but it is very important and sensitive in the regional dimension. For example, the dependence coefficient of Sistan to Helmand is almost 100%, Moghan region near Aras river is close to 80% and Sarakhs region is close to 90%. This dependence across political borders has led to the role of border waters in political relations between Iran and its neighbors. Because one of the main indicators of vulnerability to water shortage in a country is the degree of dependence on inflows across borders. Thus, the placement of water in the field of national security issues comes close to reality when a country is heavily dependent on rivers or streams that originate outside its territorial space to provide the water it needs. In the meantime, the historical and geohistorical records governing international rivers, as well as numerous agreements and many conflicts, have led to the hydropolitical formation of Iran's international rivers. Accordingly, in Iran, the main border rivers that are the cause of regional conflicts at different levels are: (Helmand, Harirod, Aras and Arvand River), of which the two rivers Helmand and Harirod, the most important rivers The entrances are in the east of the country, where part of the Iran-Afghanistan border is located on those two rivers.

Conclusion
Hydro-diplomacy has a great impact, especially in the integrated management of border waters, which in the current situation as a new tool with the help of the foreign policy apparatus to solve water crises and challenges, the results of which are "cooperation, convergence." "Interaction is the development of world water-based peace and humanism." Accordingly, a futuristic outline in order to create the desired conditions requires a review of our attitudes to water issues as an important issue, and with a realistic systemic approach, we can use hydrodiplomacy and negotiation management. With neighboring countries, the country achieved desirable and worthy results in the next decade. Because a futuristic systemic approach puts the medium and long-term perspective on its agenda, and by depicting scenarios using the institutional capacities of hydrodiplomacy to acquire and exploit water resources in neighboring countries, می‌آید. Therefore, in the present era, it is not a secret that Iran is in the midst of a water crisis in the current situation, and in the same way, it is heading towards the trans-crisis, which can be used by using the capacity of hydro-diplomacy to realize the country's water rights. Took effective steps for peaceful coexistence, and on the other hand, controlled and managed the predicted water-based tensions and conflicts, and then proceeded to peacefully allocate appropriate border waters. Therefore, in order to solve the country's water crisis, Iranian policymakers and politicians must put a future-oriented approach based on hydro-diplomacy on their agenda so that they can achieve the desired conditions in terms of access and supply of water resources in the next decade. 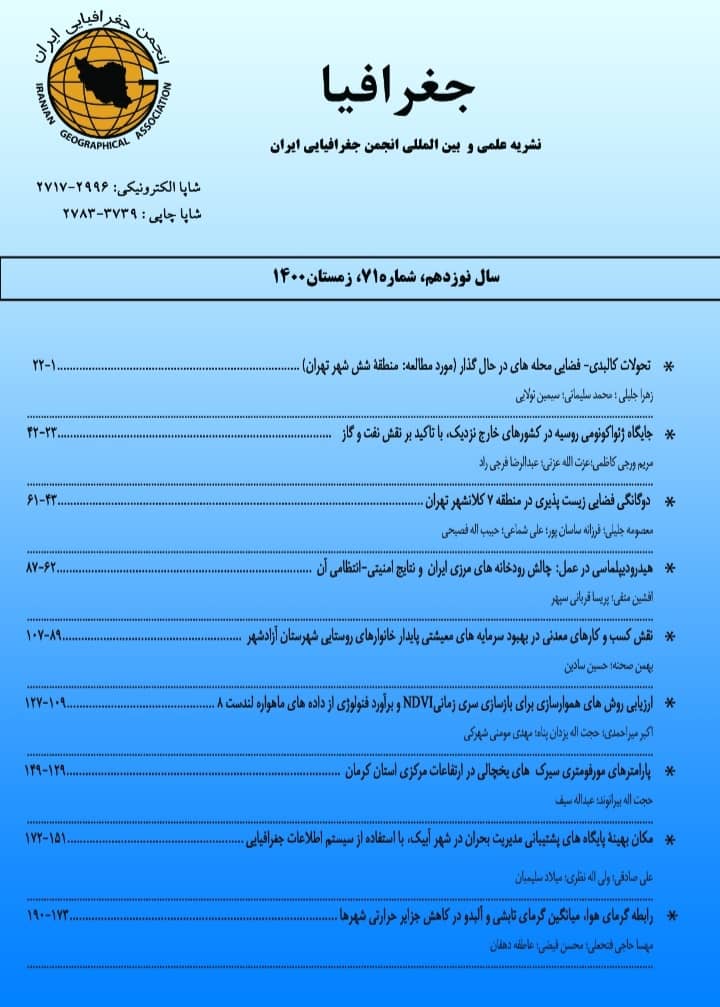