The Effect of Urban Geometry on the Formation of Urban Heat Islands (Case Study: (Districts 2 and 6 of District 3 of Tehran)

Extended Abstract
Introduction
With the increase of urban constructions and land use change, especially in big cities, the temperature of urban centers has increased compared to the suburbs, which has led to the formation of the phenomenon of heat islands in these areas. In fact, the heat islands of cities are closed isthmus lines that are known as the heat centers of the city, especially in areas built by humans and artificial structures. Since the purpose of climate studies in urban plans is to identify the environmental characteristics affected by the prevailing climatic conditions, so it can be of great help in optimizing the spatial structures. Climatic factors and elements in their quantitative and qualitative changes affect the environmental situation. Although these changes may be gradual and gradual, they can have lasting consequences. Therefore, the study of heat islands due to urban settlements has been considered by most researchers and its consequences for urban planning and global warming over the past decade have been considered with the expansion of urbanization and the occurrence of urban-related phenomena. The study of urban heat islands has begun in most of the most populous regions of the world.

Methodology
In order to develop the present study, the OK numerical equation has been used. Due to the fact that numerical models can be programmed in the field of climate by certain conditions, so they use micro-climate scales in applications. Therefore, in recent decades, under the developed conditions of cities, numerical models have been widely used, among these models is the Oke numerical model, which compares the results of the observed data according to the numerical algorithm to analyze the formation of urban heat islands with Using a series of mathematical functions and fractions, they finally designed a numerical model to study the heat island in urban and densely populated areas.

Results and Discussion
First, the average height of buildings in the area was calculated based on Equation (3). Examination of the height of the blocks showed that the highest height is related to the urban block with 24 meters and the lowest height is related to the urban block with 5 meters. Therefore, by examining the height of urban blocks, it was estimated that the number of blocks with an average height of 10 to 12 meters is more, the number of these blocks is 99. Therefore, in areas two and six, most urban blocks have an average height of 12 meters, in other words, each urban block has an average of 4 floors. According to the classification of the average width of passages, out of 227 urban passages in the region, 123 passages have an average of 21 meters. Therefore, the maximum width of the passages in the area is 21 meters. Also, in the northeastern parts of the region (District 6) and the southwest of the region (District 2), the width of the passages has reached 26 meters, which is due to the location of these areas near the highways leading to these areas. In total, in areas two and six, most of the passages have an average width of 21 meters.
Then the output of the Oak equation showed that the larger the ratio (H / W), the higher the heat island of the city (Table 1 Appendix). It can also be said that in most areas there was homogeneity between the height and width of the passages. The intensity of the heat island in the areas showed that the range is between 4-7 degrees Celsius, there is not much difference in terms of the intensity of the heat island in the whole region. The reason for this can be considered as proper planning and proper management in the field of how the buildings are located in relation to the width of the passages and observing the principles of urban planning. The results of H / W with UHI showed that if there is heterogeneity between urban blocks, the intensity of UHI will be higher at lower H / W coefficients than at higher H / W coefficients. That is, the greater the heterogeneity between the height and width of the passages, the greater the intensity of the UHI. Also, according to the following diagram, it can be inferred that in the studied areas, the low coefficient of H / W ratio has caused that most of the blocks have a homogeneous distribution and therefore the intensity of the heat island in the study area is not significant.

Conclusion
In this paper, we have tried to investigate the effect of urban geometry on the maximum intensity of the heat island, using GIS tools and the parameters of urban blocks and the width of passages. The OK numerical equation was used to investigate the intensity of the heat island. The results showed that urban geometry (height of urban block and width of passages) as two input parameters (H / W) affect the maximum intensity of the heat island of the city. In the second and sixth districts of Tehran, most of the urban blocks have an average of 4 floors (ie 12 meters). Also, the width of the passages in most areas of the region is considered in proportion to the height of the urban blocks. OKE equation simulation study showed that with increasing H / W ratio, UHImax growth is more significant, this result is somewhat consistent with the study of Gonzalez et al. (2011) and Osaki et al. (2011, 2018). Finally, the intensity of the heat island in areas two and six of Tehran's third district has not been felt, which indicates the proper configuration of the geometry of the buildings using the indicators used in the principles of architecture and urban planning in this area. Therefore, it can be said that this proposed model (OKE) can help to understand urban problems. Therefore, with proper planning and observance of urban planning guidelines by organizations and competent individuals in order to create better conditions, more targeted strategies can be adopted that can prevent the spread of the heat island phenomenon in large cities, including the metropolis of Tehran. 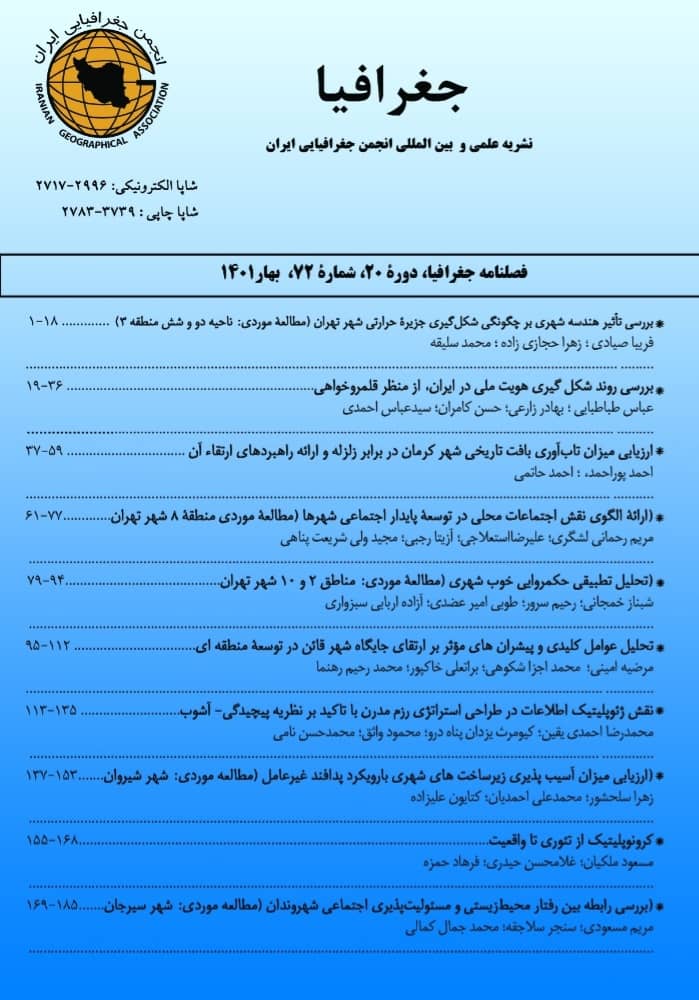