Extended Abstract
Introduction
The physical growth of cities along with the rapid growth of urban population and the inability of city managers to meet the needs of this population - which is due to unpreparedness to face this situation - is the starting point for various inequalities. The existence of these inequalities has led to the formation of informal settlements. Pakdasht is one of the satellite cities of Tehran due to its proximity to Tehran, low housing prices and the presence of industrial towns around it as an immigrant hub of the metropolis of Tehran and other immigrants in the country, which has accommodated countless poor rural immigrants. And has led to adverse consequences such as rising unemployment, inadequacies in providing services to the growing population, increasing anomalies and poverty. In this research, with accurate knowledge of informal settlements in Pakdasht, practical strategies in this field are presented. The purpose of this study is to investigate and analyze quantitative indicators in informal settlements of Pakdasht, identify the harms of urban management and its impact on the formation and growth of informal settlements, evaluate the resources and capabilities of urban management and finally provide urban management strategies to empower and organize these settlements. . Then the order of imitation, irreplaceability, value and scarcity of the study area is explained. In this regard, an attempt has been made to answer the following question. What are the management strategies for informal settlements in Pakdasht?
Methodology
The present study is applied in terms of purpose and descriptive-analytical method. The collection of information and data was in the form of documents-libraries. In such a way that the studies related to the theoretical foundations of the documentary method and the data related to the findings, the questionnaire tool has been used. The statistical population of the study is a group of experts from which 30 people who were familiar with the environment and the subject and have studied in this regard were selected by available means. The criterion for selecting this number was theoretical saturation. The data analysis method was Meta - SWOT method.
Results and discussion
All inputs of this study are based on objectives such as reducing the vulnerability of informal settlements in Pakdasht, managing informal settlements with high priority, and providing optimal strategies with medium priority. In the next step, key factors such as correlation between physical, social and security indicators, responsibility of residents and officials in maintaining urban spaces, financial management system in informal settlements, public participation, social cohesion for the success of urban management in informal settlements were identified. Then, it was determined what is the situation of urban development management factors in Pakdasht city in terms of the proposed indicators compared to the city under study. Five levels of much lower, lower, almost equal, higher and much higher were used to make these comparisons. In this regard, 5 informal settlements of Enghelab town, Hesar Amir, Vosat alley, Zeinabieh and west of Ustad Shahriyar were compared. Urban management injuries have been identified for informal settlements in Pakdasht. Due to the non-uniform weight of the identified targets, based on the opinions of experts and specialists in the field of pathology of informal settlements, they were prioritized based on the importance at three levels (high, medium and low). Finally, effective environmental factors outside the control of urban management were identified. These factors include the large volume of passing traffic and heavy vehicles, the lack of serious urban services, economic poverty, unemployment, the existence of informal economic activities, the fragmentation of urban society, the existence of various subcultures and cultural and social backwardness and illiteracy, marginalized face and functions. City, urban burnout, acceleration of growth in the absence of a targeted program, polarization of Pakdasht urban society and rising housing prices and the cost of living. Based on these factors, the strategic fit and the fit of resources and capabilities with the goals of urban management was done. Finally, according to the decisions and output of the software, a strategic map was drawn.

Conclusion
Since informal settlement is ultimately a local issue, the municipality, as a non-governmental institution and the highest and most important source of urban management, will play a major role in the process of presenting strategies and empowering informal settlements. Therefore, municipalities should take different initiatives from the past to make the best use of the participation and internal resources of these communities. The presence of more than 20% of the population of Pakdasht city in informal areas and its rapid growth is a warning to the officials and their serious concern for this issue. Addressing the current difficulties of these neighborhoods at the same time as anticipating future problems arising from their growth is essential, which requires special and comprehensive measures, different from the current routine. These measures, due to their nature, on the one hand must be done in an integrated and multidisciplinary manner in the physical environment, and on the other hand must be accompanied by physical measures and even before them, socio-economic programs for these communities. Such a comprehensive and all-out solution requires the alignment and cooperation of the relevant agencies. In connection with dealing with informal settlement, various policies and strategies from acceptance and recognition to their cleansing and destruction have been experienced, and in recent years in various countries, including our country, the solution of empowerment, institutionalization has been considered. 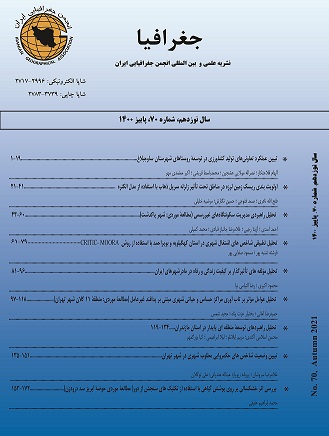